The Invertebrates of Childwall Woods and Fields.

The tiny residents of the woods and fields outnumber us by millions to one but we rarely see them and know of just a few. That was until we had a visit from an eminent entomologist, Paul F Whitehead, who knows the site well from his youth here in Childwall.

Paul very kindly agreed to walk a few of the ‘Friends’ committee around the site and see what he could uncover, and there were some wonderful discoveries made.

Straight away on the underside of the leaves of the lime trees in the woods we saw: 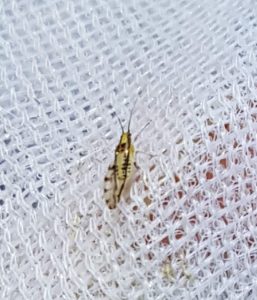 The common Lime Aphid is a highly distinctive species that feed on the underside of lime leaves (Tilia spp.) gathering together on the large leaf veins but also attracted by other adults.

The aphid in the photo is a winged female.

Light grey and slightly translucent. Rarely seen but mucus trails and eaten lichen on the tree trunks indicate the presence of this species which feeds on algae, fungus, and lichen. 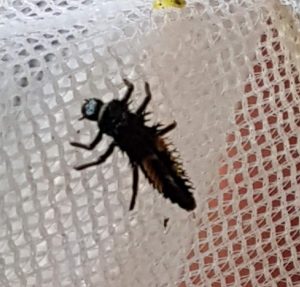 The ladybird larva looks quite different to the adult.

This ladybird is considered to be a highly invasive species that may have detrimental effects on native ladybirds as they eat the eggs and larvae of other beetles.

They breed rapidly and have colonised the entire British Isles in a decade. Like many ladybirds, they eat aphids which is the reason why they were originally introduced from Asia.

The picture shows a well-developed larva.

Rove Beetles are predatory beetles typically found amongst decaying matter where they may scavenge or prey on other scavengers.

Rove beetles are distinguished by their short wing covers that typically leave their abdominal segments exposed. There are roughly 63,000 species of Rove Beetles.

They are an indicator of well-developed wood rot in ancient, stable woodland systems. 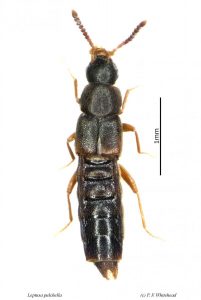 Both of these beetles were found on the stump of a Silver Birch (Betula pendula) in the northern woods.

This beetle was also found on the Silver Birch (Betula pendula) stump. This is one of a group of mostly arboreal species that are under-bark predators of invertebrates and their eggs. 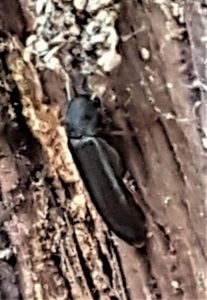 Found in Childwall Woods on the old Holm Oak (Quercus ilex) in the folly.

This beetle is recognised as an indicator of ancient woodland and is found in the better woodland sites; it is also a habitat quality indicator with a scatter of records in the north-west, This makes it of considerable conservation interest.

An exciting find in our woods. 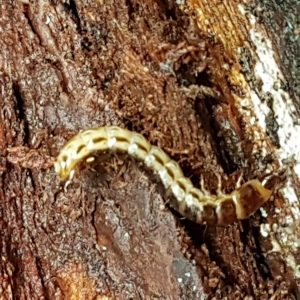 This is the larva of the click beetle Denticollis linearis.

The larvae are omnivorous feeding beneath bark on invertebrates and decayed wood.

This click beetle was last recorded on Merseyside at the National Trust grounds at Speke Hall on 1st September 1985. https://records.nbnatlas.org/occurrences/search?q=lsid:NBNSYS0000010980#tab_mapView 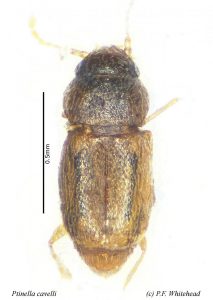 Discovered under the bark of a fallen Sycamore (Acer pseudoplatanus) by Countisbury Road. 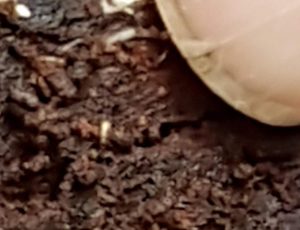 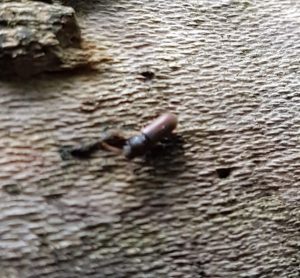 The Fan-bearing Wood-borer is a species of beetle in the family Ptinidae; when the antennae are raised, they spread out like a fan. A small widespread wood-boring beetle inhabiting much of the southern half of the country.

This reasonably widespread tenebrionid beetle has a particular affinity for well-drained or exposed areas and has increased considerably in the UK as a result of climate change.

The adult beetles feed on nectar and pollen and their name reflects their coarse, fuzzy appearance. 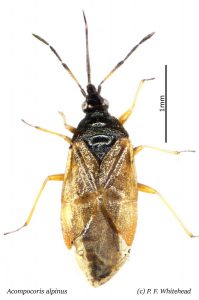 This is one of two British species of this genus of true bugs Hemiptera.

A. alpinus is a predatory species usually linked to pine trees especially in the Old Caledonian Pine Forest but also to planted pines and occasionally other conifers further south in Britain.

There are evidently no previous records in the north-western region.

This specimen was swept from Enchanter’s Nightshade in Childwall Woods. Examples are occasionally found well away from their host trees and even in more open country.