The New and Lost Champion Trees

Champion Trees are the largest and tallest trees in Britain and are recorded in the Tree Register of Britain and Ireland (TROBI).

In 2020 Friends of Childwall Woods and Fields were proud to announce that we had two rare Variegated Oaks, one of these being the champion of Lancashire by girth and height. Only 69 Variegated Oaks are recorded on 54 sites across all of Britain and Ireland and here in Childwall Woods, two were found.

What is a Variegated Oak?

A Variegated Oak is a ‘cultivar’, a man-made tree.

To create a variegated specimen of anything, an albino specimen has to be combined with a normal specimen, creating the two coloured rippled effect of the leaves. A specialist and very expensive horticultural process.

The officials from the TROBI tell us that all old variegated oak will have been grafted and the two specimens in Childwall Woods bear a graft mark on their trunk with leaves below being plain green and everything above being variegated. The dark green leaves of an English Oak, uniquely patterned with creamy white.

We are told that probably many of the oldest Variegated Oaks will have reverted back to the typical green leaves of an oak tree, but this is not the case with our trees. They have kept that creamy ripple across each leaf. No two leaves the same, as unique as snowflakes and even more beautiful.

Sadly, during storm Arwen on 26th November 2021, our Champion Variegated Oak was broken off near to its graft line where it was hollow.  We lost our beautiful Champion tree.

However, Childwall Woods had two of these wonderful man-made oaks, and the smaller one withstood the storm. As this is the only tree of its kind in the whole of Lancashire it is now the county champion.

This slightly smaller specimen (girth 1.34m) is nestled amongst the rhododendrons and you may have passed by oblivious to the clusters of cream and green leaves above you. 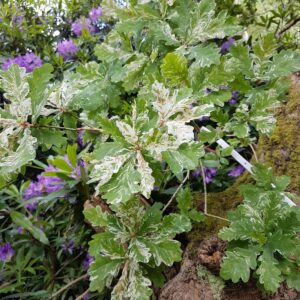 It was this specimen that was discovered first on 5th June 2020 and caused the search for other rareties, then the larger, first champion was found.

Recorded by the TROBI as the 14th largest variegated common oak in Britain and Ireland, with the larger tree being lost, this one will now be the 13th largest of its kind and the new Champion. 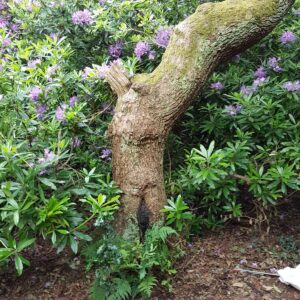 The 13th largest specimen in Britain and Ireland

A tree of character and age as can be seen by its graft mark high on its trunk and above that the stub of an old branch. 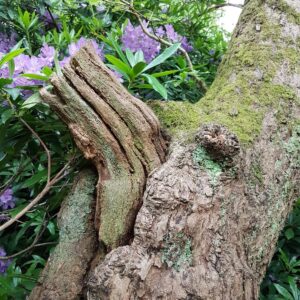 The stub of an old branch

Obviously cared for by the gardeners of the 1800s who carefully pruned its branches and kept it balanced. 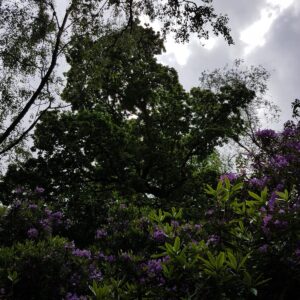 Towering above the rhododendrons

Noticeable above the rhododendrons but too high to see the beautiful patterns on its leaves.

Ornamental rhododendrons can be found not far from the rare oak. It seems the ornamental woodland walk created over two centuries ago was continued past the Folly with the largest Variegated Oak, now lost, and on into the woods past the smaller variegated oak, now the Champion of Lancashire. 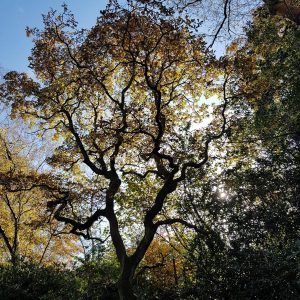 Beautifully pruned to be symmetrical and pleasing to the eye. November 2020

A truly beautiful and rare specimen of The Variegated Oak

The lost champion was only known to us for seventeen months before the end of its life on that stormy night in November.

In those last months after it became champion, it was photographed by many, featured in the TROBI National Magazine and was selected as one of 8 trees telling ‘The Story of Liverpool Through its Trees’.

Here is a record of our Lost Champion through its last year and a half. 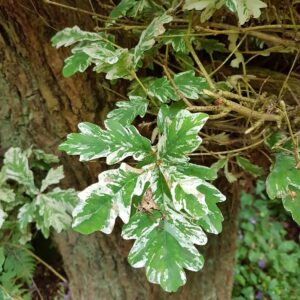 A creamy white ripple throughout each leaf. 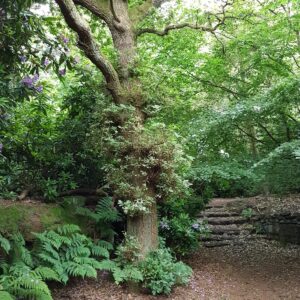 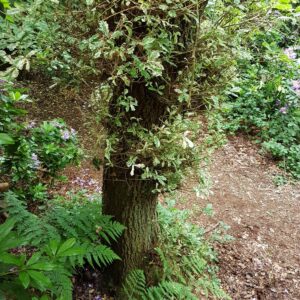 Looking down from the path above where walkers would have found themselves looking into the crown of the tree, roughly a century ago. 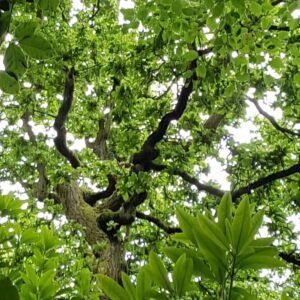 Moss covered branches indicating that this is an old tree. 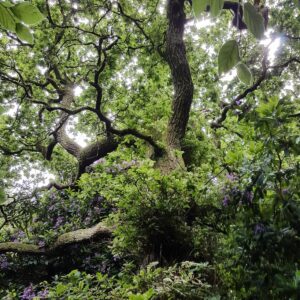 Many dead branches show in its canopy that it is past its best. 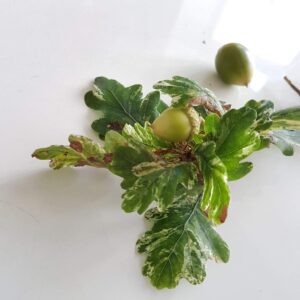 Although this was clearly a very old tree it produced many acorns in 2020 and another rare find, a variegated oak gall ( caused by a gall wasp egg). 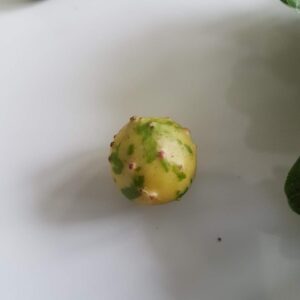 From its size, (girth 1.60m), and mossy condition, it appears that the lost champion was probably planted over 200 years ago by the wealthy owners at the time, Bamber Gascoyne Jnr and his wife. The rarity and cost of this and the new champion highlight the importance of the area to the owners of the land. A beautiful woodland walk was created, down the steps from the pathway,  past a rare variegated oak tree, down more steps, and into the Folly where more ornamental trees can be seen.

Variegated holly trees are all around this area and on top of what is locally known as ‘Monkey Island’, not to mention the unusual rhododendrons and Holm oak tree in this vicinity, reminding us of the wealthy owners who once went to the expense of creating this ornamental woodland walk.

We are so fortunate to have recognised and recorded this wonderful ornate area with so many variegated trees and saved this as a record of the past wealth and importance of the site.

This rare tree was pushed over onto the top level of the Folly by the tremendous force of storm Arwen. 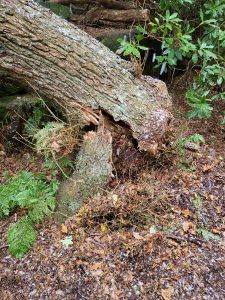 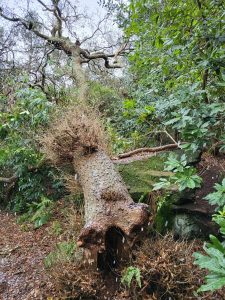 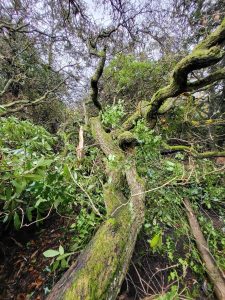 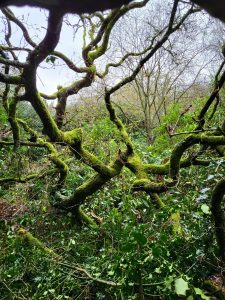 B Cameron   Secretary of FCWF

All photographs are the author’s own.