There is so much controversy over rhododendrons. Whether you think they are an invasive species or a beautiful addition to any garden, one thing is very clear, there are hundreds of them in Childwall Woods.

There are 2 distinctly different sides to Childwall Woods and the dividing line is drawn by the carriageway.

The southern half of Childwall Woods.

The southern woods are shady beech woods with some sweet chestnut and oak trees to make them interesting. Rhododendrons are not welcome there and were never meant to be there. Those that have seeded themselves will be removed before they take over the whole area and poison the ground to native woodland species. 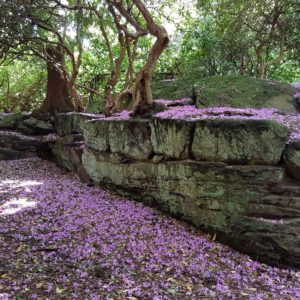 The ornamental side to the woods with its folly and hybrid trees.

The northern woods began as beech, sweet chestnut, and oak but were turned into an ornamental garden through the centuries as ornate hybrid trees were introduced for the pleasure of the wealthy families who lived there. Ornamental trees such as the variegated oaks and hollies and over 100 years ago the newly imported and newly hybridised rhododendrons were planted.

When they were first discovered and imported, gardeners in London and throughout the British Isles created thousands of hybrids, and ‘The Gardens of Childwall Hall’ had their collection of rhododendron bushes planted along the paths of the northern woods and the carriageway. Many of these would have been grafted onto tougher rootstock and many crossed with the vigorous Rh. ponticum. 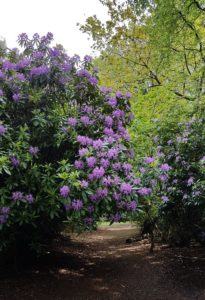 Over a century later, many of these shrubs will have reverted back to rootstock, and nature has sculpted our ancient rhododendrons into wonderful twisted trees that burst into blossom when their time is right, and what a superb show they put on for us each year.

Experts at Ness Botanic Gardens have kindly helped us to put some names to the beautiful old blooms which make up the ‘Childwall Woods Collection of Ancient Rhododendrons’, and those can be seen below. 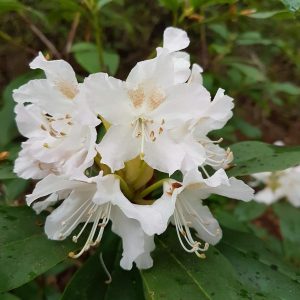 You may not have noticed the first rhododendron to bloom, Cunningham’s White. It has a bright white trumpet with an orange flare ( the pattern on the top petal) and is a hardy plant used over a century ago as rootstock to graft other less hardy plants onto.  Easily missed as it is not on any path but tucked away in the other rhododendrons. 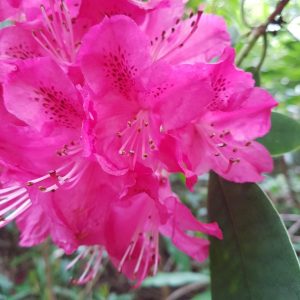 This stunning dark pink bloom is “Cynthia” and it was first exhibited in London in 1860. Very popular due to its wonderful colour.

A dark brown flare and fuzzy back to its leaves make it easily identified. 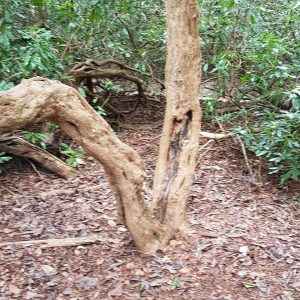 It looks like we might have had Cynthia on our site from the 1860s as its multi-stemmed trunk suggests it is over a hundred years old. 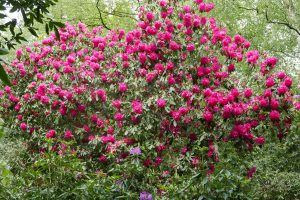 Hollow it may be but still spectacular when in full bloom.

You may notice the Rh. Cynthia trees as you walk through the north woods, as there are 7 of these spectacular trees along the paths and in the middle of the wilder area behind the bird feeding station. With that colour, they can’t hide.

Don’t imagine all the purple rhododendrons are the same. The hybrids can always surprise you. Like this bloom within a bloom.  Reaching 7m (roughly 20ft) high this is one of our tallest rhododendron trees. 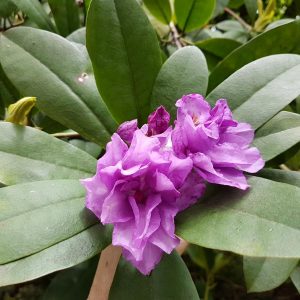 Rh. fastuosum flore pleno, a hybrid from the 1800s

It is commonly known as FFP and is a hybrid of two varieties, Rh. Catawbiense and Rh. Ponticum.

It was created in the Mid 1800s in Belgium and imported into Britain shortly afterwards.

The hollowing twisted trunk of our FFP’s suggests they too are over a century old and would have been prize exhibits in the ornamental garden of the day.

Yes, we have two of these ancient rhododendron trees in our woods. Have you noticed them? They hang so low you may have brushed into them. 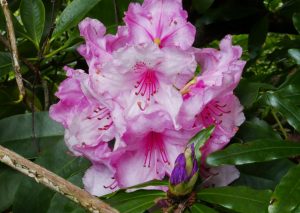 This beautiful pink bloom was also a hybrid of the 1800s being created in Britain around 1892.

Its very large delicate pink flowers make it stand out amongst the lilac blooms around it in the woods. The purple bud in front of it this bloom is from Rh. Ponticum nearby. 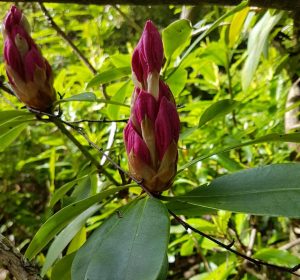 The buds of Pink Pearl are the first thing to make this tree stand out as a different variety to the rhododendrons around it. Very tall and pointed buds, along with wide, dark, furry backed leaves tell us that this plant is a hybrid.

Our tree has been on its side for many years but that has not stopped it from producing its large pink flowers, and where the soil has crept over its fallen trunk it has set down roots and pushed up new shoots. It’s such a relief to see it is surviving and reestablishing itself.

But this large showy tree has one more trick up its sleeve. It changes colour. Its delicate pink flowers fade to a pearly white, creating another dimension to an already beautiful rhododendron.

We are lucky to still have a specimen of Pink Pearl in our woods. Ancient and horizontal but still flowering vigorously. Maybe you will notice its pink and white flowers when it blooms again. 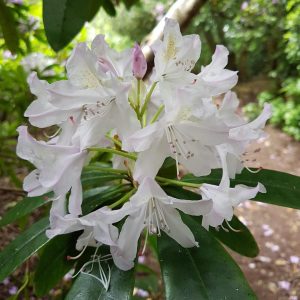 Just when it seems all the whites have disappeared, this late bloomer appears.

Slightly tinged with pink on the buds this white shows the same wide tristed trunk as its ancient neighbours.

Maybe you’ve spotted it on the narrow back path, nestled in between the pinks of Rh. Cynthia and the lilacs of Rh. Ponticum.   A superb mix.

There are many other rhododendrons in our woods, as yet unnamed but still magnificent.

Rh. Ponticum is cross-pollinated very easily by bees and other flying insects resulting in many different varieties of the same plant, all differing slightly in size, colour or leaf.  In Childwall Woods we have an abundance of these hybrids created by nature, and when in bloom they cannot fail to please.

Here are a few that may light up your walks in May and June. 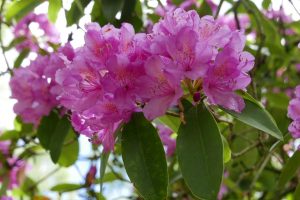 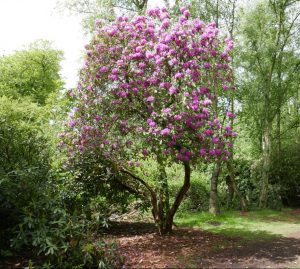 This beautiful tree is roughly 6m (18ft) in height and seems to be indestructible as a fire was lit underneath it in April and it still produced all of these beautiful blooms in May.

Thought to be a variety of Rh. Ponticum. 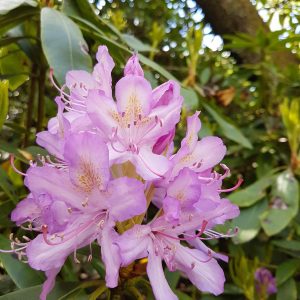 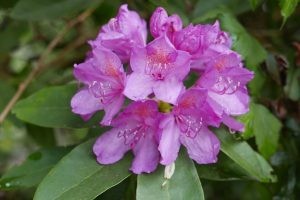 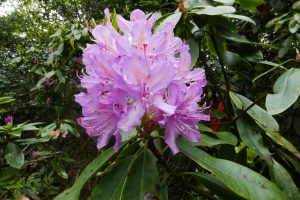 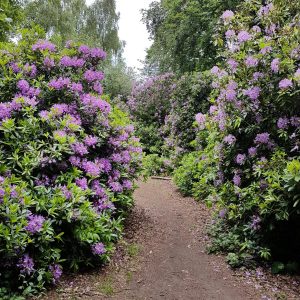 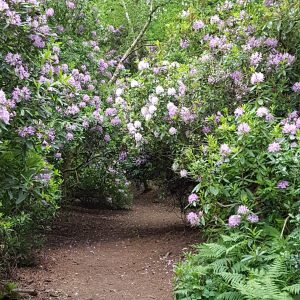 Many thanks to Ted Brabin and Colin Mugridge, respected experts from Ness Botanic Gardens, who have been so helpful in identifying our wonderful ancient rhododendrons.

Photos are the author’s own.