The Carriageway and The Grounds of  Childwall Hall

Not suitable for buggies or wheelchairs due to soft uneven ground between points 1 and 8.

Of the many walks around Childwall Woods and Fields, the walk that begins with the carriageway is the most magical. The carriageway dates back to when this was the main entrance to the grand Childwall Hall known in its heyday as Childwall Abbey due to its monastic look.  For more information visit the History Page. 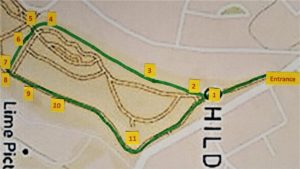 You will need: A camera and strong shoes, but from April to September it is usually dry enough to walk the full length. It may not be possible to push a buggy or wheelchair along this route due to the uneven ground in the carriageway 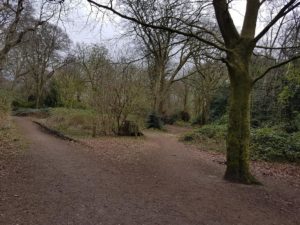 1. The Entrance to the woods

Enter the woods by the main gates next to the Lodge on Childwall Abbey Road and walk forward to where the path forks. Follow the path to the right which is the main pathway into the site but just a few steps, then the path on the far right. You will then be at the start of the carriageway. 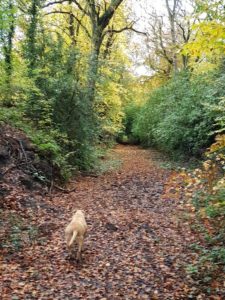 2. The Entrance to the Carriageway

As you walk through the carriageway you will see many signs that this was once an important route through the grounds and up to the door of Childwall Hall. At the start the walls are low and the trees have pushed their way over the top making this a leafy summer walk.

The floor is solid Bunter Sandstone, now covered with centuries of leaf mold, making it very soft underfoot whenever there has been rain. Be prepared with strong waterproof shoes. 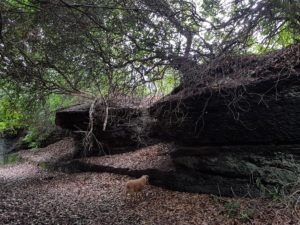 Outcrops of rocks form shelves and overhangs, while twisted tree roots from intricate patterns (below). 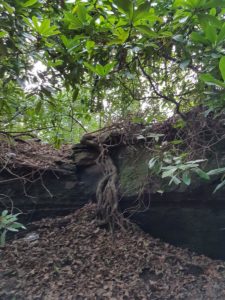 The steep sides of the carriageway expose the Bunter Sandstone formed millions of years ago. This is recognised as a Regionally Important Geological Site (RIGS) and forms a dramatic high wall on both sides. 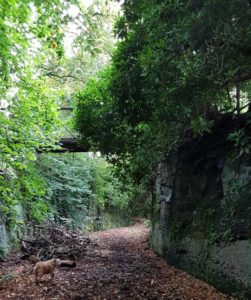 The bridge is known to everybody who walks the woods but not many walkers get to see it from this angle.

Today there is a metal bridge but would that have been the case hundreds of years ago? 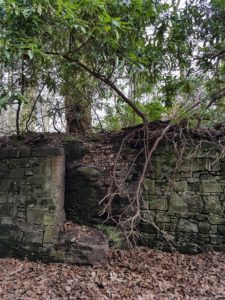 Although the carriageway was cut through Sandstone there are sections of well-constructed brickwork illustrating the importance of this entrance to the great hall.

Constructed by craftsmen these walls have held back the ground for hundreds of years and are still a beautiful sight to see. 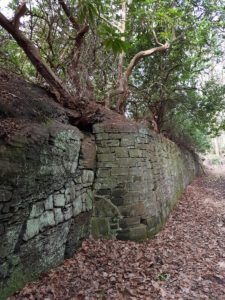 Is this a passing place built into the wall of the carriageway?

Beautifully constructed as you would expect in a feature of such importance, this being the first thing to be seen when approaching Childwall Hall in a carriage. 7. Sweet Chestnut Trees as old as the Carriageway

Don’t miss the wonderful old Sweet Chestnut trees at the end of the carriageway.  A group of 3, relics from the past but now valuable ecosystems for the many creatures living in them and on them. 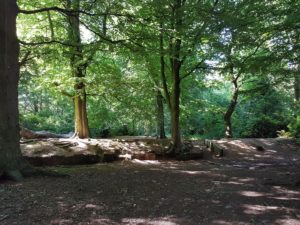 Follow the carriageway to its end and turn left through the walk-through boarded each side. 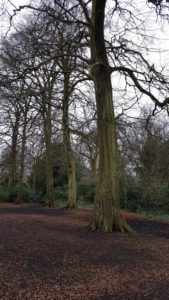 9 The Veteran Trees Near to the Hall.

Ahead you will see a row of huge Beech trees, hundreds of years old from their size.  Walk under the Beech trees straight ahead until a clear path can be seen.

You will undoubtedly notice the large fallen tree on your left 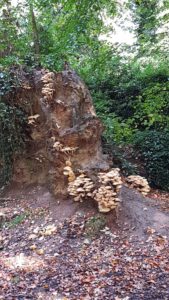 And if you are lucky you may see a fresh bloom of fungi on the upturned tree roots to your left.  Left to the fungi this will take at least a decade to break down but it is well on its way. No longer shading the important visitors to Childwall Hall. 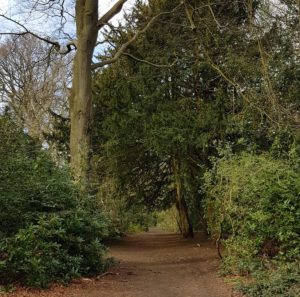 As you step onto this narrower path you may notice that the trees change character here and many Yew trees line the path, reminiscent of a time when the Chapel could be found to your right. There are still remains if you venture down towards Lime Pictures. See the History Page 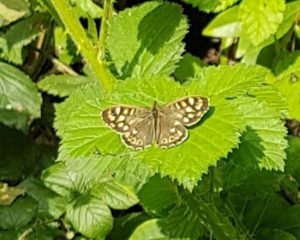 This shady path is a favourite place for Speckled Wood Butterflies who love to bask in the dappled sun during the summer months. 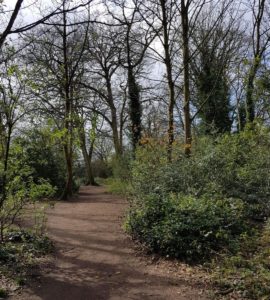 Follow the path as it turns and runs parallel to Childwall Abbey Road, past the small side and back to the main entrance by the Lodge House. 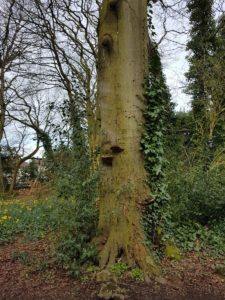 Take time to enjoy the wonderful Beech trees along the path as you return to the Lodge. They are very old and have many ancient characteristics, such as large brackets, hollows and dead wood.

In April the sea of Daffodils will catch your eye and in late summer you may find beechnuts falling around you as you walk.

Perhaps you will notice the old white hollow tree on your right as you get near to the lodge. Sunbleached through time and full of holes and hollows, perfect for bats and owls.

This walk will take roughly 30 minutes depending on your speed but you will not want to rush it, there’s far too much to see.

Photographs are the authors own unless otherwise stated.