Japanese Knotweed has been in the media recently due to its invasive nature. It was named by the World Conservation Union as one of the most invasive species in the world. 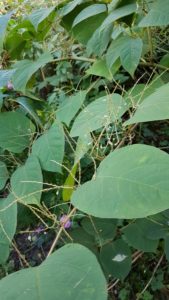 Japanese Knotweed (JK) is native to China, Japan, and Asia but was introduced into Britain in 1850 as an ornamental species. It can now be found throughout Europe, Britain and the USA and is classified as ‘invasive’ as its root system grows with such strength that it can damage concrete foundations and push up through roads and buildings.

If left unchecked it will choke out all other vegetation spreading across meadows and through anything manmade that may be in its way.  In 1981 it was made a matter of law that the owner of any garden or land where JK is growing could be subject to a fine if a programme of eradication was not put into place.

In Childwall Fields, roughly 200sqm of JK has been found spread over a number of sites and Friends of Childwall Woods and Fields has begun a long term programme of eradication which began in 2018 and has continued this year. This was a stand of the knotweed in August 2018 when it was still green and in full bloom. 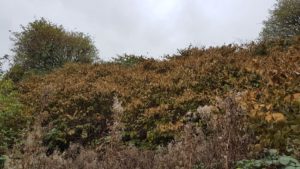 In autumn it began to die back and turned brown. 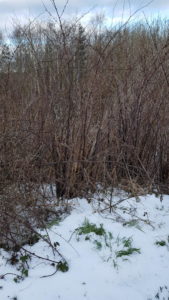 Eventually, the leaves dropped and only the dead stems remained through the winter. Although it looks totally dead it is still alive underground waiting for warmer days to bring it back to life.

Friends of Childwall Woods and Fields are most fortunate to have a Japanese Knotweed Specialist on the committee who is leading the programme of eradication. It consists of trampling the old stems down so that when the new shoots emerge they can be sprayed with a strong systemic herbicide which will travel to the rhizomes and eventually kill the plant. 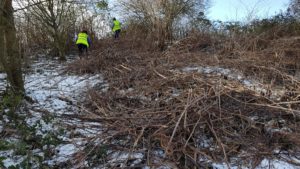 This is just one of many stands that were slashed and trampled on a snowy Sunday in February by FCWF and local Volunteers.

There is so much JK on the Childwall Fields that it will take many hours of work to flatten it all before the next stage, which is when our Knotweed Specialist will spray all the new shoots after they emerge in spring. 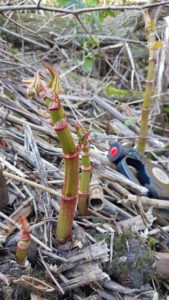 We will keep you posted.