On a beautiful day in the woods, the group of volunteers began their work. 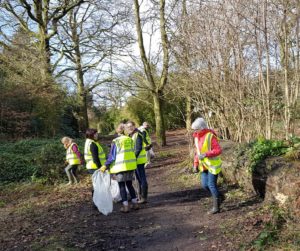 Some of the team went off around the streets clearing them of litter while others concentrated on the woods.

Cutting back brambles at the entrance to the carriageway was a priority, as opening up pathways throughout the nature reserve is one of the main aims of the group. 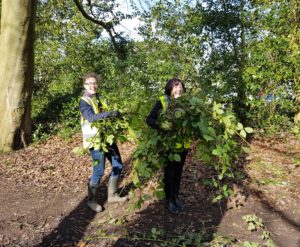 The cut brambles were carefully relocated to the perimeter of the woods on Childwall Abbey Road to continue building up a barrier between the two. The woods are 2 metres higher than the road at this point and a barrier is needed there to ensure safety.

Continuing the planting of Holly and brambles from 2 weeks ago a corridor for wildlife is being constructed next to the path. Brambles are no barrier to wildlife, in fact, they are often a shelter and food source but will secure this area from human intruders after the gates are locked. 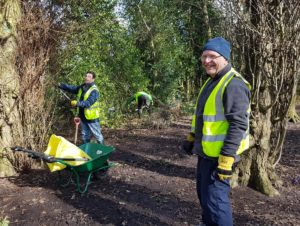 Unfortunately, the woods are often used at night for ‘lamping’, and other unsavoury activities which a nature-friendly barrier will restrict. A heavy but essential job to help protect our wildlife. 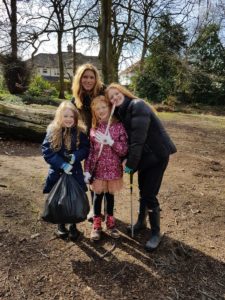 The litter pickers were busy in the woods as well as around the roads, and our newer members did a brilliant job as we can see by the bag full of rubbish they collected. 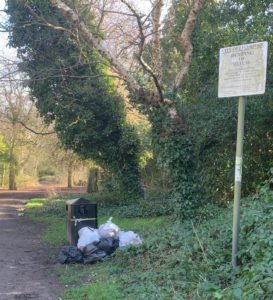 Altogether 7 bags of rubbish were removed from the woods and streets around the woods, which is half the amount that was collected at this time a year ago. We seem to be making a difference.

Yes, those are our bags dumped under the ‘no dumping’ sign but we have an agreement with the council for them to be removed first thing on Monday, so we are exempt. 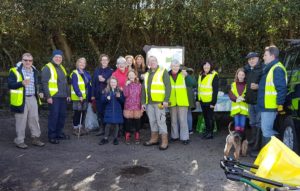 And of course, a scone with cream and jam is an essential after all that picking and planting.

Thanks again, Jeanette. (Hiding at the back as usual.)

There’s always room for one more at the refreshments table, why don’t you join us next month?