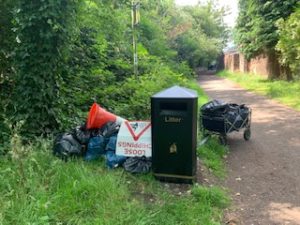 The bags and other items were left aside the litter bin at the Childwall Lane gatehouse entrance ready for the pre-arranged collection by the Council contractors. 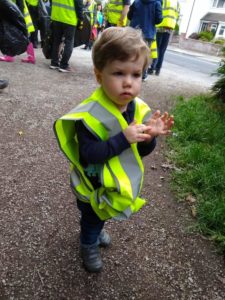 The Friends were joined on this occasion by members of the South Childwall Resident’s Association- SCRA. Our numbers were further swelled by three generations of the one family, a couple of lads and dads teams and one grandad and grand-daughter team. Who says Sunday’s are no longer about family time!

An army of 18 making a very visible presence on Childwall triangle as a clear message is sent that litter in Childwall will not be tolerated. The philosophy is simple. Our focus is the nature reserve but it is the people who litter that are our target, aiming eventually to turn the tide and to prevent litter rather than cure it.

Change the mindsets, change the behaviour and change the culture. It may take a generation but through positive engagement and visible leadership, the Friends will prevail. 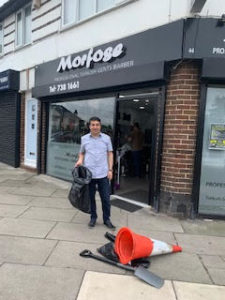 Once again the staff of Morfose, the Turkish barber’s were hands-on supporters. On this occasion, they filled a bag or two themselves collecting rubbish from the service road behind the shops. I am grateful to Mustafa as pictured for his enlightened attitude and warm welcome. More engagement will lead to more involvement and less rubbish. The surprise on the faces of the passers-by and those at the bus stop who were chatted to whether they enquired or didn’t as to what we were up to. 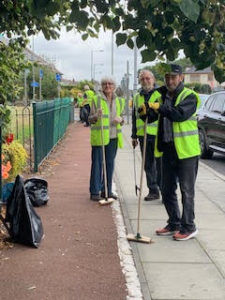 Every opportunity was taken to explain our mission and to get agreement that it is the right thing to do. 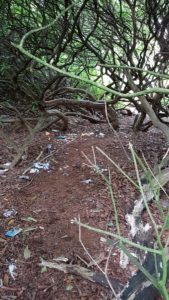 After a deep clean of the triangle covering all three corners and the beautiful greenery, the friends took to the woods clearing the carriageway following reports of large quantities of rubbish under the bridge and various hidden dens and meeting places.

The most significant items in today’s rubbish were the multiple canisters of N20- Nitrous Oxide. Apparently called Whippets and used for cooking, they are also used as a temporary stimulant. Clearly a chef in a hurry had off-loaded his year’s supply of these canisters over the bridge adjacent to Countisbury Drive along with other paraphernalia and unwanted items.

Selling these items for cooking is one thing. Knowingly selling them to someone who is going to use them for nefarious activity is illegal. The talk-to-frank website advises that N2O is a psychoactive drug and is covered by the 2016 Psychoactive Substances Act, which means it’s illegal to give away or sell. Supply and production can get you up to 7 years in prison, an unlimited fine or both. Not the sort of thing desirable in our Local Nature Reserve.

On a more positive note; I am no longer surprised at the number of ideas that flow when walking and talking through the woods. The skills and talents of the Friends have no boundaries and several viable initiatives have been proposed to improve our beautiful oasis of calm and refuge within the city.

Our friends at SCRA are concerned that our beautiful woodland is attractive to some visitors for the wrong reasons. FCWF are considering a range of measures to engage and discourage the less positive behaviours and there will be more on this to follow.

I look forward to seeing the further fruits’ of our labours in the months and years to come.