The once familiar woods were unrecognisable in the darkness as the night walk began. 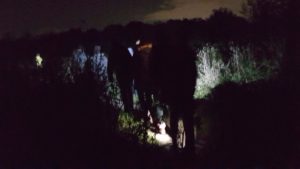 Led by our chairman John, the group of walkers followed the path, carefully walking in pools of torchlight.

No-one knew what we would see or hear in the woods at night. 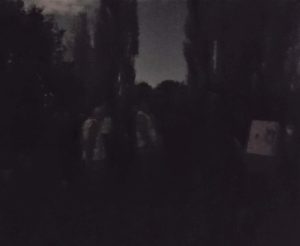 The woods without torches are very dark and colourless but soon our eyes grew accustomed to the lack of light and images emerged from the grey. 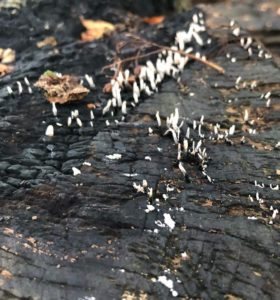 As we walked through the woods a few stops were made to look at the bioluminescent fungus that thrives on the dead and decaying wood in the wetter areas.

Its gentle glow could just be seen with infrared torches.

(More information can be found on the fungi page)

As the group stopped near to a large tree, a sharp-eyed walker noticed there were Harvestmen spiders all over the trunk. They are small-bodied, long-legged spiders and can be seen looking for food in many different environments. However, this common arachnid is not known as a nocturnal creature but was clearly seen here, hunting in the dark of night? 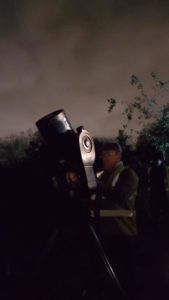 The participants (both adults and children) were surprised to see a telescope set up and waiting for them as they rounded a bend on the ridge.

Childwall Woods and Fields has a fantastic vista facing east towards Huyton, St Helens and beyond. Other parts of the site provide a view towards the River Mersey where the Runcorn bridge can be seen on a clear day. The low eastern horizon enables astronomers to sight objects earlier in the night sky. 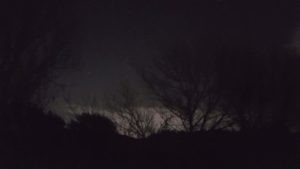 The participants used the telescope to look at a variety of stellar and planetary objects with adults and the children keen to be first to take a look. The clear skies arrived perfectly on time to see Neptune and Uranus slowly transit towards the South.

Astronomy is a natural science and alongside the talks on the flora and fauna, the event provided a feast for anyone with an interest in the natural world.

Note: Scope used was a Meade LX 200 GoTo catadioptric telescope with a 203mm aperture. Our group will be making contact with the Liverpool Astronomical Society to see if Childwall Woods can be included in their extensive list of regular outreach events