Under a bright autumn sun, the planting began.

As beautiful as Childwall Woods is, especially in spring, there are always ways to make it more spectacular. That’s what Friends of Childwall Woods were doing on Sunday.

Six different species of native woodland flowers were identified by our ecologists and sourced ready for planting. They were :

This bright blue species differs from the Spanish bluebell being much smaller and has a more tubular bell-shaped flower. It appears in late spring as beautiful carpets under the bare trees. This native bluebell is in danger of being lost as it cross-pollinates with the introduced Spanish bluebell and produces a different species. Since 1998, native bluebells have been protected by Schedule 8 of the Wildlife and Countryside Act (WCA) and it is illegal for anyone to pick native bluebells. Let’s leave them to take our breath away in the woods.

Lily of the valley, Convallaria majalis

A native of the Northern Hemisphere this beautiful spring flower is known for its fragrance. Legend has it that it was discovered by Appollo.

This relative of the Lilly of the Valley is a native of Northern Europe and Siberia. Such a pretty flower it has been hybrid as a garden plant.  Not a common English woodland flower but naturalised in Scotland.  We look forward to seeing it in Childwall Woods next spring.

This delicate little flower is a member of the buttercup family and appears in early spring. It quickly spreads in shady woods and will be a favourite flower for the early pollinators. 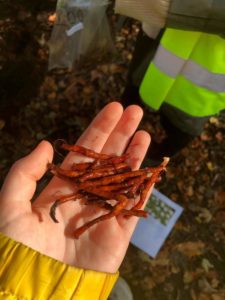 Here are the rhizomes of the Wood Anemone, not to be mistaken for pretzels.

A common woodland plant and member of the onion family, it is prized for its sweet garlic taste. It grows from February to June and unlike domestic garlic, it’s the leaves, not the bulbs that are eaten. It looks pretty good too and fills the air with its scent in the fresh spring woods.

A member of the buttercup family and native to Europe and West Asia. Although a beautiful flower to see in the woods it is a farmers nightmare as it is toxic to grazing animals. The plant emerges in late winter and produces its flowers in May. 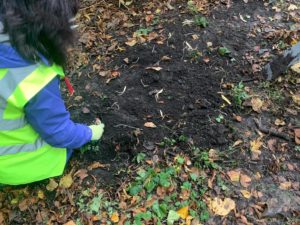 Pam, scattering the bulbs to get a more natural look before digging them in. – Photo by J McCombs

A hearty band of volunteers turned up to plant over 300 bulbs and rhizomes. 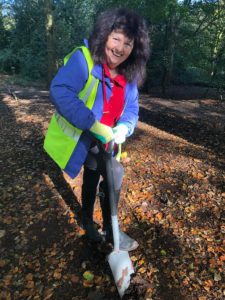 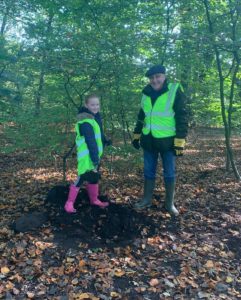 Hannah and Geoff. Looks like Hannah is doing all the work here. – Photo by B Cameron Helen, Geoff and Steve, too busy to look up. – Photo by John McCombs

Groups of ‘Friends’ were visible heads down digging and planting throughout the more open parts of the woods. 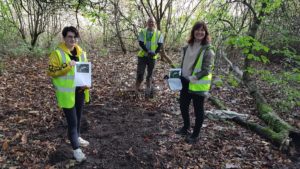 Erin John and Gill, standing over their Lilly of the Valley bed. –  Photo by B Cameron

Groups of ‘Friends’ standing proudly over their work 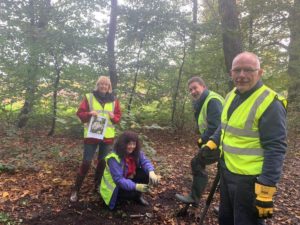 After 2 hours of scattering digging and filling, it was time to stroll back to the entrance just before the heavens opened again. 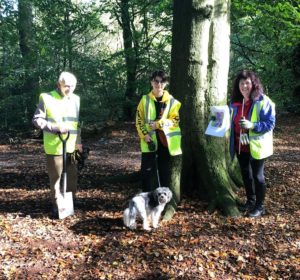 David, Erin, and Pam. Having a break. Everything’s planted. –  Photo by Gill McCarthy

Natures way of bedding in the bulbs and ensuring a spectacular show of flowers next year.