September; the dog days of summer fading in memory with the autumnal equinox approaching making the days noticeably shorter and cooler.

Our litter-pick was greeted by a subdued sun; nevertheless, more welcome than any rain.  It’s a strange fact that during the peak of our summer here in the Northern hemisphere, the earth is at its furthest point from the sun in its orbit. It’s the planet tilt of course, that creates the seasons and brings with them the rich variety of flora and fauna that makes for an ever-changing tapestry in our wonderful woodland. Andy Warhol famously stated that “Land really makes the best art” and we are blessed with a fantastic seasonal vista here on Childwall ridge.  (See ‘The Seasons’ webpage) 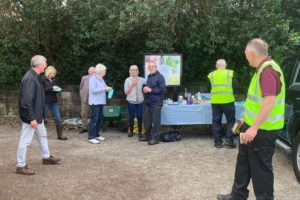 A few of the 14 volunteers, claiming their reward.

It was a small but enthusiastic bunch of the usual suspects that greeted us on this occasion. Several Friends having migrated south, like the birds albeit temporarily to catch the remaining summer sunshine free from the disturbance of effervescent children, avoiding perhaps the peak prices, the crowds and the chance of air-traffic controller strikes. Several of our faithful remarked that it made for more home-made scones (cream on top of the jam, please) for them. A small reward for their endeavours 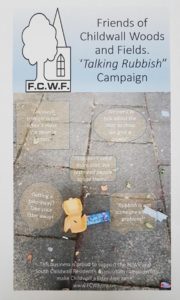 It was pleasing to see that relatively little effort was needed to tidy up the Childwall Triangle and the area around the shops. Several of which were boldly displaying our Talking Rubbish campaign poster. 18 of the 26 businesses have signed up to displaying it and the more conversations we have on this, the more we show that we give a damn, the more we will challenge the anti-social behaviour of those who willingly desecrate and befoul our streets with their attention-seeking imprint. Those business owners who are actively clearing the area to the front of their establishments should be congratulated for their contribution; supporting our desire for a litter-free Childwall. 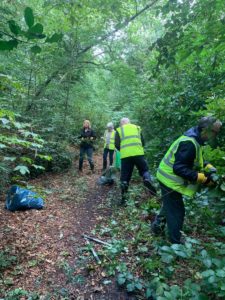 Several volunteers armed with secateurs and loppers cleared the over-hanging greenery from the carriageway in readiness for our History Walk on 22nd of this month. 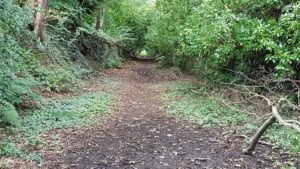 The carriageway after clearance. 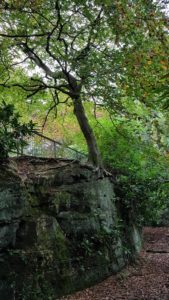 The Carriageway is a special feature of our site and is deservedly designated as a regionally important geological site for its exposed sandstone faces. 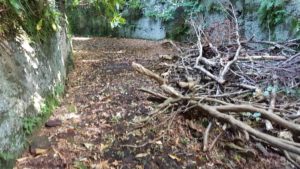 The larger uprooted trees that seek to inhibit a walker’s progress will be cleared shortly. 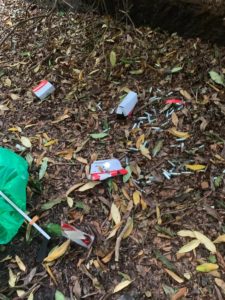 Again amongst the debris and detritus were two boxes of the offensive silver NOx canisters. Unfortunately, the container and contents had parted company and they were distributed along the path. They were soon scooped up and will not be available to whomsoever would seek to make whipped cream alfresco. A small wooden stool was also recovered and one of our members is considering creatively re-engineering the remains. I look forward to seeing the results.

I am grateful to all the volunteers, Friends and committee members who steadfastly turn out on many occasions to contribute to maintaining and improving our small slice of paradise. Our committee is progressing a range of initiatives and there will be more enjoyable opportunities to contribute. Details will be shared when our plans are sufficiently mature.

Eight bags of rubbish and one small stool.