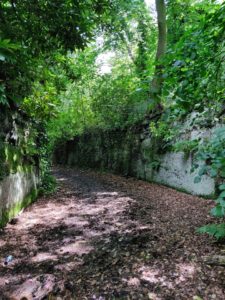 The deepest part of the carriageway

The weather Gods were kind to us with bright sunshine replacing the downpour of Spanish storm Miguel which battered Liverpool the previous day. Five committee members were joined by eleven relatives, friends and neighbours, all of one mind;  that citizen action will prevail over those who seek to desecrate our beautiful local environment.

The target of today’s efforts were the main paths of the woodland with two teams venturing forth; one tackling the carriageway and beyond.

The Chair of FCWF, John, tackling the detritus near the perimeter fence.

The other tackling the perimeter path and areas close to the Lime Studios fence. The slopes of the fields were deemed to be too treacherous after the recent rain.

It was pleasing to see faces new and familiar joining us as the word spreads that we’re a sociable bunch united by a common goal. The inducement of the hot drink and a cake as a small reward for our efforts were not of themselves a reason to participate – being part of the solution was reason enough. Litter pickers, hand gel, and gloves were available to all, with the wheelbarrow enabling the clearance of the more esoteric heavy items.

Litter was plucked from under the hedgerows, under the brambles and from high up in the trees. No barrier was considered inaccessible or out of reach with the natural defenses of Holly and Hawthorne gently yielding to our concerted efforts.

The woods were left looking bright from the rainstorm; washed by the gods and tidy; from the intervention of mankind. 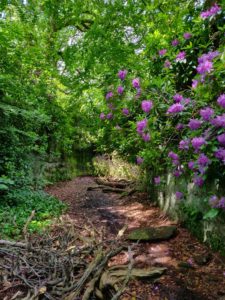 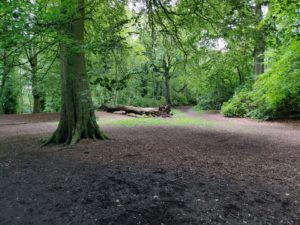 A fallen tree by the carriageway. Just beechnuts underfoot 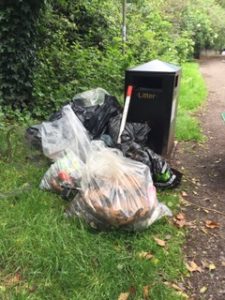 Corrugated iron sheeting and an iron grate (weighing 20kg at least!)  both old and rusted but not of archaeological significance.

The remnants of a (yes another!) car seat, a traffic cone, a plastic bollard, a length of barbed wire and more bottles than would be found in an entire high-street of licensed premises.

The bags and other items were left aside the litter bin at the Childwall Abbey Rd gatehouse entrance ready for the pre-arranged collection by the Council contractors.

Good citizens of Childwall – you should be proud of today’s efforts – well done to you all.