Rhododendron ponticum is classified as an invasive non-native species as it destroys habitats and animals with its toxicity.  The Woodland Trust calls it  A devil in disguise.  ‘It may look pretty, but its effect on the landscape is significant’,  say the Woodland Trust in their article about invasive species.  They go on to say ‘It prevents native ground cover flora and shrubs from growing as well as preventing natural regeneration of native trees.’

But not all Rhododendrons are the same. Many Rhododendrons in Childwall Woods were planted as ornate shrubbery by the owners of Childwall Hall many years ago and were kept trimmed and in order until the grand house became empty and was demolished. Then the Rhodies grew wild and the seeds spread to the woodland area to the south of the site. Most of those will be removed to allow native woodland vegetation to establish. 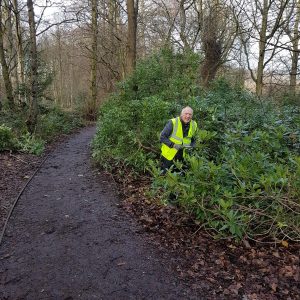 Andrew just beginning to tackle the mound of Rhododendrons by the path.

The rhododendrons that were planted in the ornamental gardens over a century ago will be identified by experts from Ness Botanical Gardens as soon as they bloom then they will be catalogued and pruned correctly to preserve them for years to come. We are hoping to have some very old and significant species. We already know how beautiful they are from April to June each year, and will make sure that is an annual occurrence to look forward to.

As part of the Habitat Improvement Project Friends of Childwall Woods and Fields volunteers met to get rid of as many of the smaller plants as possible in the open woodland area towards Woolton road.

Twelve volunteers tackled the mounds of Rhododendron bushes along the path from the Woolton Road entrance.

Ever aware of the Covid-19 pandemic that we are still in the grip of, 2 groups of volunteers were formed, with all 6 volunteers maintaining a social distance.

Roots were removed if possible and the cut branches placed by the side of the path to allow natural rot of the wood.

While one group tackled the bushes along the path the other group set about destroying the huge area of Rhodies by the Woolton Road entrance to the woods.

Cut branches left to offer shelter to small animals and eventually return nutrients to the soil. 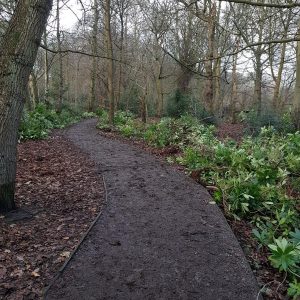 Neat rows of cut branches to keep walkers on the paths and alow native woodland plants to re-establish.

After 2 hours the results can be seen. The woodland floor is in sunlight again.

Not the growing season yet but let’s see what native plants re-establish themselves in spring now that the Rhododendron bushes have been removed.

What can we expect to see in a year or two?  Ferns, bluebells, wild garlic, wood anemones, foxgloves, primroses, etc etc etc.

Thanks to all the volunteers who turned up on a cold winter’s day and got stuck in.